The most adorable thing happened at River Market last week. A three year old was break dancing to a cheering audience. It was the best way to end Easter. Project Soul was at River Market to conduct The Routes last Sunday, a freestyle dance performance and workshop for kids. The workshop was part of a series of monthly events hosted by ArtStarts, which features creative arts workshops and process-based explorations for young people with some of BC’s best children’s artists.

The event also featured the nucleus of the freestyle dance movement: The Battle. The dancers presented their affinity to specific styles—Whacking, born in Hollywood in the seventies, and Voguing, inspired by fashion poses on the cover of Vogue magazine, invented in New York city, and the children played judges, voting for their favourite dancer.

The best part of the event was towards the very end, when Kim demonstrated her personal style. Full of animation and character, her moves were reminiscent of Locking, the first ever freestyle dance movement created. She introduced the audience to ‘The Power of the Point,’ encouraging both parents and the more suspicious and hesitant children to follow suit and ‘lock’ specific moves. By the end of the show, she had the whole audience dancing and cheering. 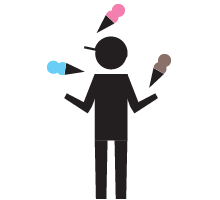